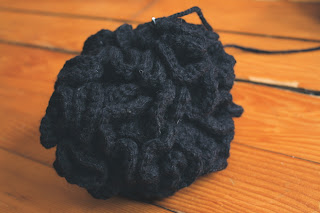 "Exponential growth occurs when the growth rate of a mathematical function is proportional to the function's current value. In the case of a discrete domain of definition with equal intervals it is also called geometric growth." 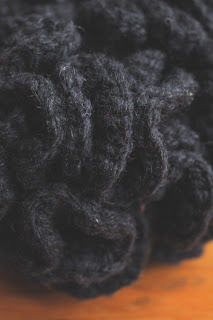 I've applied the principles of exponential growth directly to the growth patterns of circular (spiral) crochet: for each stitch that I am stitching onto to keep "building", I create two new stitches. This means every time I make a full round, I am doubling the amount of stitches from the previous round - 4 stitches in first round, 8 stitches in second, 16 in third, 32 in fourth, etc. What happens is that the exponential growth is creating too much material too quickly and therefore needs to ruffle to accommodate the growth.....the flat circle quickly becomes a sphere. 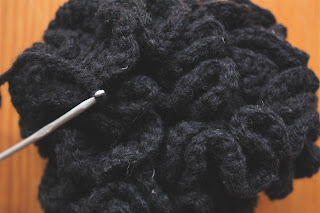 After humming and hawing over what to do for the "thing itself" project for my Science into Art class in a previous post, I decided to focus on mathematical principles applied directly to technique and material.
Posted by Rilla Marshall at 11:39 AM 1 comment: 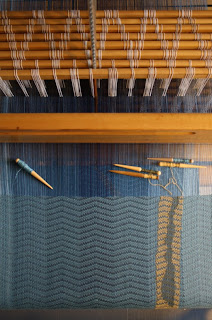 I'm headed back to the studio today to keep working on my piece of Sable Island. The weaving is based on a contemporary satellite image of the island. The only physical characteristic of the island that I'm inserting in the inlay/overshot is Wallace Lake. In the 1700 and 1800s, the lake was much larger and open to the ocean, and sometimes provided a (somewhat) safe shelter for the boats that would otherwise be shipwrecked on the islands sand bars. In the photo above, you can see part of the middle half of the island, while the curving western tip has been woven and wound around the breast beam....
Posted by Rilla Marshall at 10:31 AM No comments:

As I mentioned earlier this winter, I am sitting in on a sculpture class this semester at NSCAD. Taught by Thierry Delva, the class is called "science into art" and is studio based. Our second project is a challenge. In the class, we've been discussing the idea of the artwork being "the thing itself" versus "the illustration of the thing". Somewhere in the middle lies "the demonstration of the thing". The "thing" we speak of is the science. A lot of art work is referential: illustrating or refering to something that it is not. My mapping pieces are an example of this - they are not the actual shoreline, but are instead a representation of the erosion of the shore illustrated in woven cloth.

When we talk about the science becoming the art itself, we are delving into the realm of the work itself being the phenomena. And yet, this is different than a mere demonstration of a scientific phenomena which would veer into science fair project or museum display. Needless to say, I am having some difficulty coming up with a satisfying idea for this challenge. I may be over-thinking it....sticking with simple but poetic notion, and something that is accomplishable in one week (too many of my ideas I have involve lots of time passing). 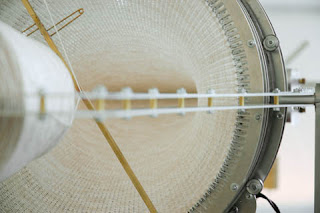 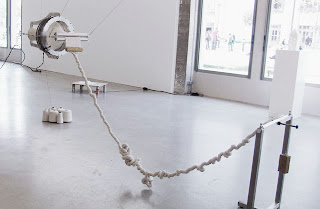 In researching other artists, I have found two strong examples of pieces that incorporate textiles into works that are "the thing itself". The first is a piece by Judith Fergerl called Galatean Heritage: a circular knitting machine that creates a long cloth tube that is then spun, being forced to double up and twist back on itself. 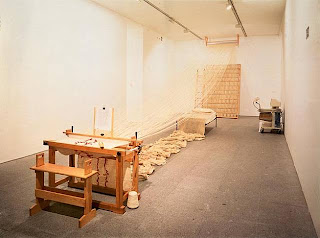 The second is by Janine Antoni (I remember seeing images of this when I was a student and being very struck by it) called Slumber - the artist sleeps in the gallery on a cot with electrodes that read her brainwaves while in REM sleep. The next day, she wakes and weaves her brain patterns (on a loom of her own design), using strips she tears from the nightgown she wore as she slept. At night she sleeps under her dream blanket. After many performances/exhibitions of this piece, the blanket is now over 200 feet long.

I've been thinking about over-spun handspun wool: under tension at its full length, and when that tension is released how it wants to twist and turn around itself...it's really about time and space, but the question is, how do I make this curious material phenomena into compelling art?
Posted by Rilla Marshall at 10:23 AM 1 comment: 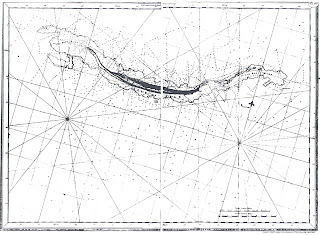 I'm heading into the studio today to get started on another piece. I'm planning on weaving an aerial map of contemporary Sable Island, and then once off the loom, embroidering past coastal profiles and geographical features from maps of days gone by, including the map above by JFW DesBarres from 1779, and the map below by Blunt from 1897. 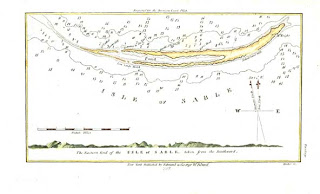 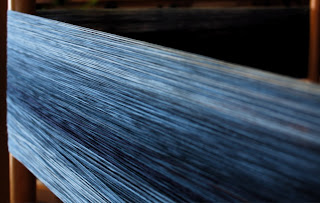 Posted by Rilla Marshall at 9:21 AM No comments:

Yesterday I went in to the studio for a couple of hours and finished my piece depicting the shoreline changes to West Point, PEI. I'm thrilled to see it off the loom. While weaving, I can only ever see a small section of the piece while I work and the woven cloth gets wound around the front breast beam. I really like the dimensions of it: about 82" long by 25" wide, like a banner. I now plan on embroidering the shoreline profiles, choosing my colours and stitches carefully, with the purpose of layering time and drawing measured contrasts of the changing coast. 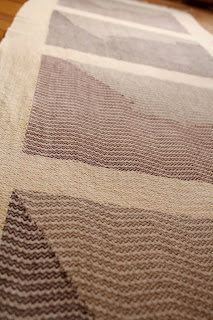 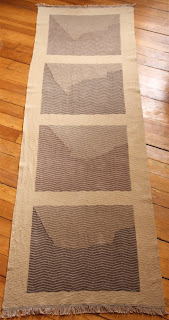 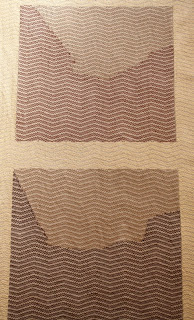 These photos were taken while the piece was laid flat to dry on my home studio floor. Hence the funny perspectives. I do plan on hanging the piece eventually....I'm thinking I want to see more: a row of banner-like pieces hung side by side creating a larger experience. And for those weavers out there - it is all cotton, woven in a 8-harness twill within twill pattern, which I adapted for overshot use, and then adapted the overshot (or pattern weft) to use as inlay allowing me to build the imagery. I love what's happening with the woven pattern, creating this 3-d optical push and pull as the pattern zig-zags across the cloth.
Posted by Rilla Marshall at 11:07 AM No comments: 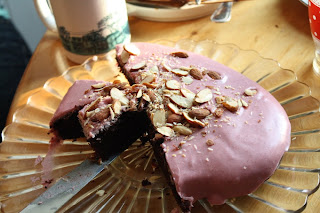 Yesterday was my 32nd birthday. Friends came over in the afternoon and we ate lots and lots of food which is usually the nature of potlucks. Joanna made this amazing heart-shaped cake - the icing coloured with beet juice and flavoured with cardamom and cinnamon. As it was quickly being devoured, I got in just in time to take a photo. I had a great day surrounded by the ones I love and today, Valentine's Day, my heart is still full.
Posted by Rilla Marshall at 9:53 AM No comments: 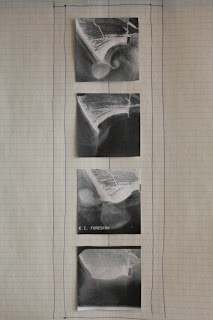 For the past week, I've been going to North Pocket Studio almost everyday to work on a new piece on my Cranbrook loom. The piece is a long, vertical cloth, depicting four aerial photographs of West Point, PEI spanning the years 1958, 1974, 1990, and 2000. 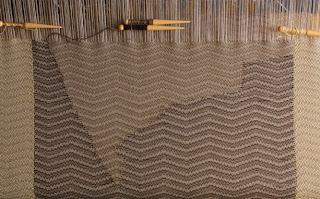 The changes to the profile of the coast are dramatic. I've simplified the images in my weaving so that the I am only using one colour for the water and a different colour for the land, both in very neutral browns. 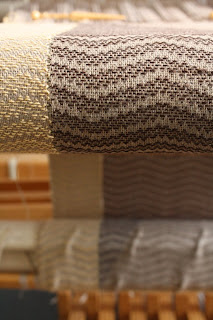 Once the piece is off the loom, I plan on going back in and embroidering the images to delineate the sedimentary plumes in the water (which you can see in the original black and white photos), as well as mapping the historical shore profiles as progressive erosion occurs. 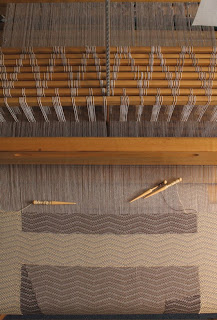 Posted by Rilla Marshall at 1:05 PM No comments:

I met Bronwyn Gallagher last September in Fredericton when I participated in an outdoor craft fair organized by the New Brunswick Craft Council. Bronwyn is a fellow weaver and recent graduate from the New Brunswick College of Craft. And, being a young weaver trying to make a go of handweaving and entrepreneurship, we had a lot to talk about. I ran into her again over the past weekend when she was in town for the Atlantic Craft Trade Show and she told me she just purchased a 32 harness AVL loom after years of saving her money. Wowzers. She'll let me know when her website is up and running, but until then, I found a little video of Bronwyn being interviewed, talking about some recent awards she's received, and the magic of differential shrinkage - a technique I've been using in my scarves for years, but she really brings it to the next level by using double cloth.
Posted by Rilla Marshall at 9:40 AM No comments: 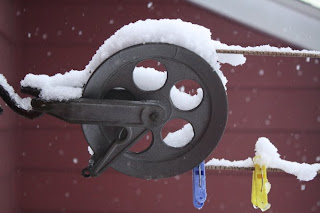 It's mid-winter. The days are getting longer, but one day to another the weather changes drastically. A bright sunny day like yesterday and the sun's warmth is so rejuvenating. And then waking up today to big fluffy flakes and a gray sky. My thoughts are turning to spring, summer and change. Damien is graduating from NSCAD in April and one chapter of our lives will be coming to a close and another one beginning. There's no certainty about where life will lead us next, so the only thing to do is to pour myself into my work for the next few months and hunker down for the rest of the season. 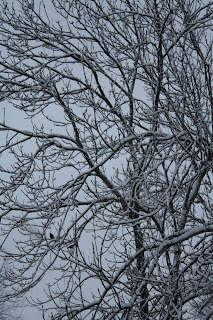 Posted by Rilla Marshall at 12:10 PM No comments:

I think I'm on the mend. Today I have more energy than I've had the last two days. 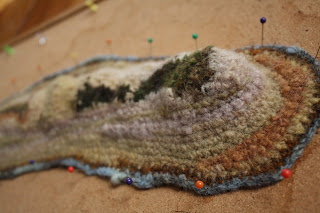 I managed to finish my third island which I started yesterday. A dune island: long and bright, like the sand spits that extend along the north shore of PEI and glow golden on summer afternoons. 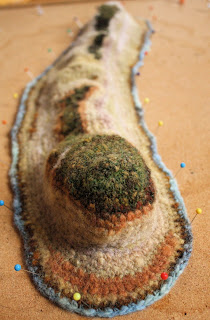 Because they are constructed of sand, they are easily breached by storm surges and sea level rises. Year to year, shorelines made up of dunes are dramatically altered and are often the first pieces of land to become separated from the larger land masses. Really happy with how this one turned out...I will now turn my attention to making smaller islands. 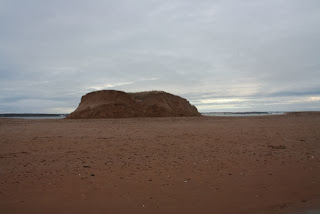 This is a photo I took from BJ Sandford's blog, a glass artist on PEI. She took this after a severe winter storm over Christmas. This is a sand dune on the north shore of PEI that was literally transported away from the shore and out towards the water by the power of waves.
Posted by Rilla Marshall at 1:38 PM No comments: