Damien and I have rented a car this whole week for our vacation to our Island home of Prince Edward Island. After some delays yesterday getting out of the city - we realized just before picking up the car that Damien's license had expired, so he renewed it while I packed things up - we hit the road. We meandered our way along the Parrsboro shore of Nova Scotia, stopping at a beautiful beach in Five Islands for an incredible view of red sandstone islands rising out of the Minus Basin and supper in the town of Parrsboro.

I'm spending some time with my parents today before they take off for a weekend vacation tomorrow, and then Damien and I are taking in Canada Day with some friends here in Charlottetown, and on Friday we head up to the Bluegrass and Old Time Music Festival in Rollo Bay with Damien's parents and some buddies. It's summertime and everyone needs a vacation. 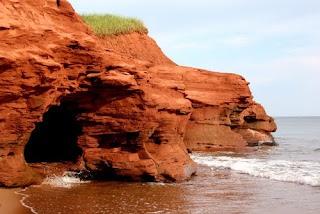 On a more personal note, I got my forehead mole removed last week. A big change for my face! For those who know me, I have had this large sticky-out mole in the center of my forehead for as long as I can remember. In the last decade, it had become more and more prone to chronic infections (I'll spare the gross details). It was something I would have to do eventually, in fact I had scheduled 2 separate appointments since I was 22 years old for its removal, and each time changed my mind at the last minute (in a strange twist of vanity). But this time I did it. After three days of swelling and some bruising over the weekend (on Friday I looked like one of the aliens from "Avatar" with the bridge of my nose swollen out to the inside corners of my eyes), the swelling pretty much subsided on Sunday. I got the stitches out yesterday morning before we left Halifax, and the incision is healing nicely. It will take a while to get used to this change, but in the meantime, I'm doing all I can to make sure it will heal well and leave the smallest visible scar.....
Posted by Rilla Marshall at 10:06 AM No comments: 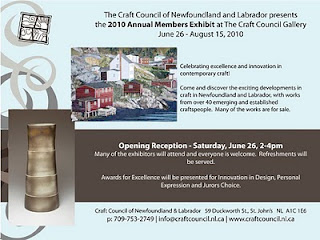 If you happen to be in St. John's tomorrow or anytime over the summer, make a visit to the Craft Council of Newfoundland and Labrador Gallery in Devon House at 59 Duckworth Street. Opening tomorrow June 26th with a reception from 2-4pm is the Annual Members' Exhibition, a selection of juried works created by Craft Council members in a wide range of media. My piece, Bottle Cove, is a part of this exhibition and I am thrilled that it was selected amongst the 150 submissions. The exhibition is up until August 15th.
Posted by Rilla Marshall at 11:33 AM No comments:

I'm still plugging away at weaving my Wave scarves, but I've now moved on to the narrow version. I'm hoping to get the bulk of them done before we leave for a week on PEI next Tuesday. I should really sit down and add up my inventory to see where I'm at and how far to go to reach my production goal for the fall craft fairs. Then it's on to a new design which I'm quite excited about. 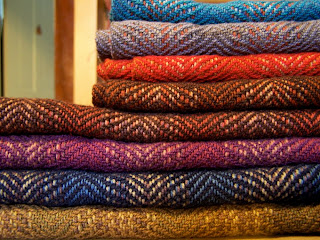 In other news, I just got word in the last couple of weeks that I've been accepted as a juried member of both the Nova Scotia Designer Craft Council and the New Brunswick Craft Council...that means my scarves passed the standards committees and I can now participate in both provinces' juried craft fairs, as well as access the benefits of belonging to these fine craft organizations (ie - funding information, marketing).
Posted by Rilla Marshall at 6:14 PM 1 comment:

Textile artist and editor Joe Lewis has asked me to write an article for his on-line magazine, Fibre Quarterly. This issue's theme is "Comfort Zone" and warm woven wool blankets from PEI's MacAusland Woolen Mills fits the bill. Since I'm from PEI, a weaver, and he's been having trouble finding a contact on PEI to write the article, I said I'll do it. Plus it's a good way for me to do some research into the regional blanket-weaving tradition as my art practice starts to take on the form of blankets more and more...

The original mill operation included a carding machine to convert raw fleece to batts which the mill sold by the roll for handspinning. The MacAuslands realized the woollen products were their best seller and in 1932 the mill produced its first blanket, now the staple of the operation. The business is now the only mill in Atlantic Canada still producing traditional blankets of 100% virgin wool. I visited the mill once when I was a teenager, have ordered many skeins of wool from them over the years, and own one of their beautiful queen size blankets.
Posted by Rilla Marshall at 11:23 AM No comments: 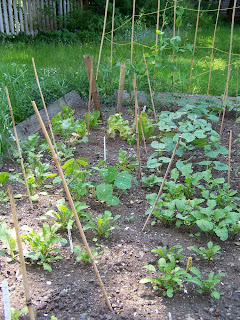 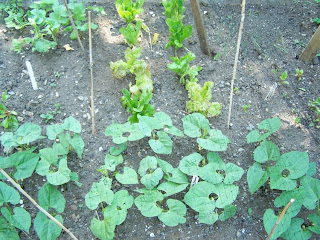 This happens every year. We long for warm weather all through the long, cold, sloppy winter, and then - bam, we look up and it's summer. Everything is alive and lush and green. Today in Halifax, the heat is over 30 degrees Celsius. Our back garden is growing. Every night we've been eating salads made from our own greens and herbs. Last night, we even ate our first two radishes...
Posted by Rilla Marshall at 2:52 PM 1 comment: 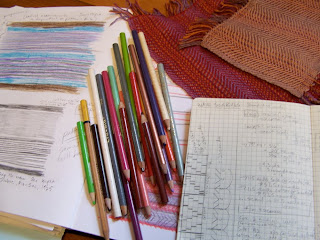 The last little while, I've been feeling a bit stuck in my production weaving. A bit static, a bit frustrated. I think a part of it is feeling like once I've designed a scarf for production, I must stick to the specifics of that design, even if I have a nagging feeling that the design could be improved for aesthetics, function, etc. Part of this (somewhat silly) idea comes from initially gearing my production weaving towards wholesale and consignment retail clients who want consistency so they know what to expect when they order, with the exception of one or two new designs a year. There's also that sinking feeling that once I've been weaving scarves a certain way for a while, and then I modify the design - all that time weaving the old design was wasteful and now I have all these scarves that I can't stand behind as strongly as I should. Now that I'm focusing more on production for the fall craft fair season, this notion of never changing a scarf design is unnecessary, and ultimately an impediment to challenging my design skills which should really be improving and becoming more sophisticated as my work advances with designs that are always considered, deliberate and evolving.

The big thing I've been thinking about lately is modifying the sett of my warp threads through my reed. Even a small adjustment of switching from 16 ends per inch to 18 ends per inch can make a big difference in the subtle quality and character of the cloth, as well as the time it takes me to "finish" the scarf after it's off the loom. The more spaced out those warp threads are, the more likely they will get pushed around during weaving so the pattern is disrupted and that means a lot of time spent sitting on the couch afterwards, fiddling with a needle to get the weft threads looking neat. My weaving teachers told me this when I was at NSCAD, but it always pays to make samples, especially when it comes to determining the density of the cloth and what sett is needed for the desired effect. It's also very important to me that I make scarves that are going to last and last - I am not interested in contributing to a throw-away consumer culture - and good design is essential to aid that goal. 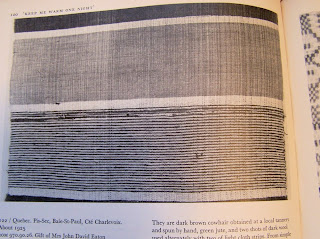 I've also been pouring over a great book called "Keep Me Warm One Night", all about historical handweaving in eastern Canada with tons of photos. I'm particularly inspired by this stripe composition on page 100 in a rug woven in Quebec in 1925 and am working through adapting it for a wide cotton and raw silk scarf. I quite like what seems to be at first an asymetrical composition, but is actually quite balanced, though the stripes on either side of the center line are different.
Posted by Rilla Marshall at 6:53 PM 2 comments:

This morning I went into the studio and finished off my weaving of Bottle Cove. It's now washed and drying in the sun. I have to sew a casing along the back for a wood dowel and have it ready to install and in the mail tomorrow morning to St. John's for the Craft Council of NL's juried members' exhibition. 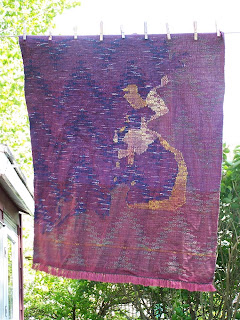 Lots of learn from this piece. I'm getting better with interruptions along the weft axis (islands, outcrops, anywhere that I have to use many colours going across at the the same time), and I'm happy with some elements of how I highlighted my first-hand experience of exploring the shore area.... it gets me thinking more about the land bordering the sea and our relationship to that liminal space.
Posted by Rilla Marshall at 4:47 PM No comments: 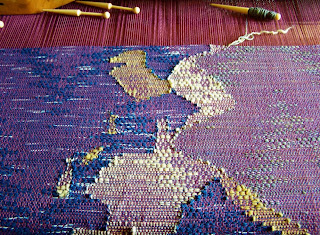 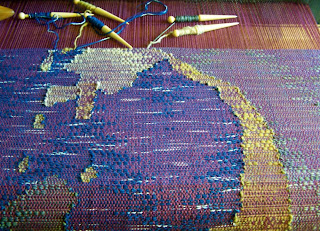 Yesterday afternoon, I finished weaving the cove of Bottle Cove, and this morning returned to the studio and finished the series of coastal outcrops.
Posted by Rilla Marshall at 3:09 PM 2 comments: 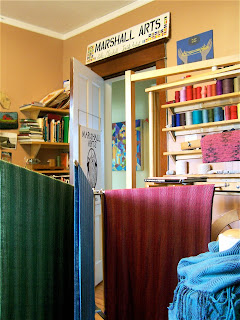 I spend most of my working time in my home studio. There, I do almost all steps of my scarf production weaving, spin wool, plan projects and ideas, store my weaving library, and try and keep my files straight. Every now and then I look around and appreciate this little playroom I've built for myself..... 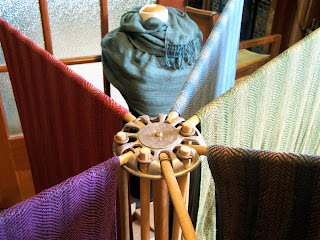 Right now, I have my new Wave shawls drying on my tripod drying rack, and one on a mannequin. I'm really excited about these - it was time to go big. 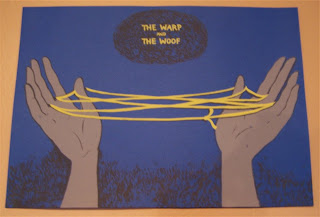 I bought this little blue screen print of "cat's cradle/warp and woof" at the Halifax Crafters' Spring Fling market in April. I love the language of weaving, a whole vocabulary of meaning....
Posted by Rilla Marshall at 1:58 PM No comments: 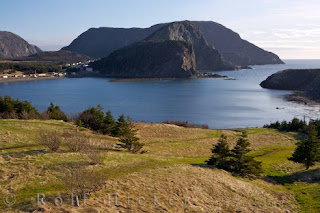 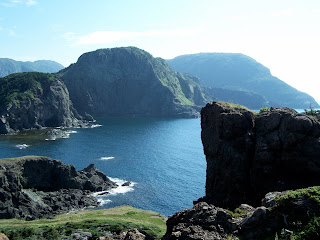 I've been working on a new piece on my Cranbrook loom at my "other" studio. The piece depicts the aerial view of the coastline of Bottle Cove, a little crescent-shaped inlet on the west coast of Newfoundland. I'm making it for the Craft Council of NL's annual members exhibition in St. John's this summer. I forgot to bring my camera with me to the studio yesterday, but here's some images of this magical place. When we lived in Corner Brook, we would make our way out there any time we could, a 45 minute drive west to the gulf of St. Lawrence shore, where the water stretches across to Northern Quebec.
Posted by Rilla Marshall at 11:50 AM 1 comment: 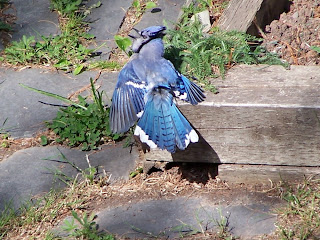 The last week or so, it feels like summer is really here. Today it's rainy and wet, but all the leaves are out and everything is very much alive and growing. I've particularly noticed the symphony of bird songs from morning until night. Last week, I saw this blue jay sunning himself for a good 10 minutes in the sunshine, wings and tail feathers spread, soaking up the rays. I love the shades of blue and patterns....
Posted by Rilla Marshall at 5:27 PM 1 comment: