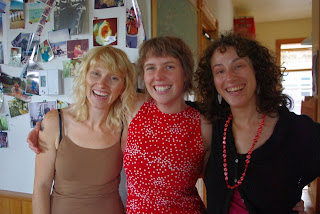 I've been battling a bad cold the last couple of days. Getting a bit of weaving done here and there, but also having to take lots of naps and blow my nose often. It makes me feel a little anxious to have to take time off from weaving to get better, but hearing reassurance from my good buddies makes me feel better. My dear friend Kyla just moved to London England to study and she sent me this picture today, taken just before she left at the beginning of September. It's a shot of Brooke Miller (left), Kyla Milne (center) and myself (right), all three of us good friends since our teenage years. Kyla reminded me in an email today that I will get my weaving done, not to worry, and the most important thing to do is take care of myself while I'm sick and rest when I need to. Aww, the wisdom and comfort of friends....
Posted by Rilla Marshall at 12:13 PM No comments: 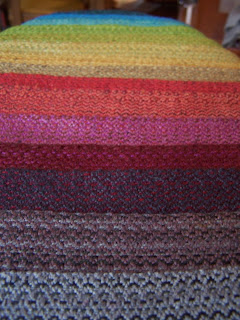 Last night I went to see the documentary "Handmade Nation". It was a look at the rise of DIY craft/art/design in the US in recent years. It was an enjoyable movie, but I left the theatre feeling like some aspects had been overlooked. There was a real emphasis on the anti-capitalist, anti-consumer philosophy of the "indie" craft movement. I understand this ideology, especially its imporant stance in relation to our mass-produced western culture - BUT - as craftspeople who are creating (often) functional objects to make our living, we are relying on the desire of people to acquire, to buy, to consume what we sell. While they are motivated by different reasons to buy what we make as opposed to going to the mall, we still rely on that consumer desire. I felt like this aspect could have been explored in more depth. 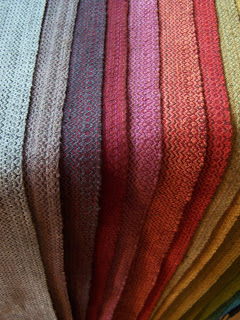 I would have also liked to see more variety in the craftspeople themselves in terms of media and technique and the connection between the traditional crafts and the "indie" craft movement. Most of the crafters interviewed were sewers of some kind, many of them working with reclaimed fabrics, but I would have liked to hear the perspective of craftspeople who have chosen ceramics, jewellery, and weaving as their medium of choice and how they see themselves and their work in a contemporary context.

Another thing I would have liked is interviews with the people who are buying the work of the crafters. There were no interviews with customers, aside from retail shop/gallery owners. The customer is a very important cog in the viability and vibrancy of this movement, and they weren't given any time in the movie.

Aside from these constructive criticisms, I did enjoy the movie - it was great to see a subculture I am part of right up there on the big screen and to see its place in contemporary culture, and it was a packed house......
Posted by Rilla Marshall at 10:15 AM 1 comment:

colour on a gloomy fall day 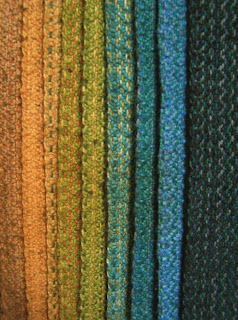 I have finished my production weaving of Echo scarves for the fall and am dyeing my last batch this afternoon. I think I will have well over 40 Echo scarves to get me through the fall season. 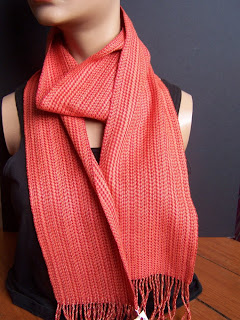 Next up is Tidal scarves: a one off design I did last fall for the shows which has been very popular as a classic scarf. I've decided it is well worth making a batch of these and putting them into production rotation. They are lovely and fine to weave and the dyeing is always so interesting. They are a woven in a fine twill pattern, using raw silk, cotton, and merino wool.
Posted by Rilla Marshall at 1:28 PM No comments: 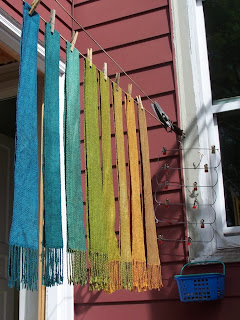 and perfect weather for drying dyed scarves on the line....tropical colours for San Diego order.
Posted by Rilla Marshall at 1:24 PM No comments: 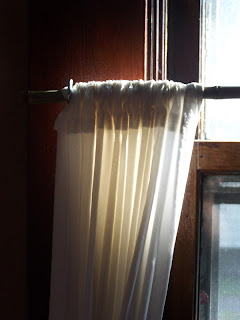 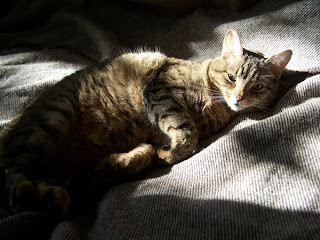 Posted by Rilla Marshall at 10:30 AM No comments: 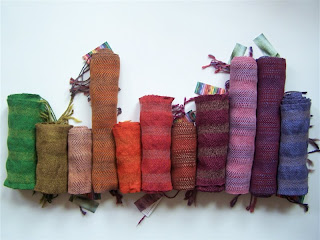 It has been a hectic last week. This time of year is always busy, but I find each year it gets busier as my little weaving enterprise grows. A couple of weeks ago, I got an email from the manager of a boutique in San Diego, California called Pigment. She had found me through Etsy and wanted to place a large wholesale order for the Christmas season. After some initial panic at squeezing this work into my production schedule (I'm doing two retail shows in November), I realized I could not turn this down! The boutique looks beautiful from the photos on the internet, and this is my first chance to start a wholesale relationship with a business outside of Canada.

So, I've been strategizing on how to make hay while the sun shines. The first thing I realized I needed to do was to hire a student to help me out one day a week to help with all the finishing work so I could concentrate on the weaving and dyeing. I found the perfect studio assistant this week and she starts on Tuesday. I also had to ask my consignment shops to send me all or some of their scarves back so I could fill the San Diego order and another order for a shop here in Nova Scotia. My consignment shops were all very understanding and it means my inventory shot back up and I maybe won't have to work ALL the time this fall. The photo above is a selection of scarves for a wholesale order for the shop in Nova Scotia. I usually do this with wholesale orders to make sure the colours and styles are what the shops wants.
Posted by Rilla Marshall at 10:24 AM 1 comment: 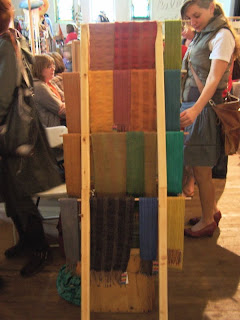 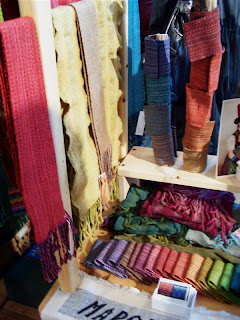 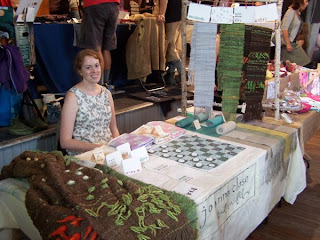 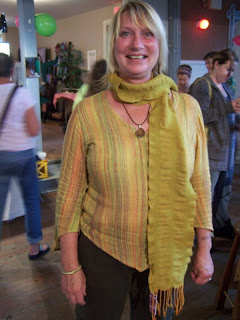 and the lovely Denise Reiser, modelling a birthday scarf given to her by her daughters Brooke and Jancis Miller.
Posted by Rilla Marshall at 7:14 PM 3 comments: 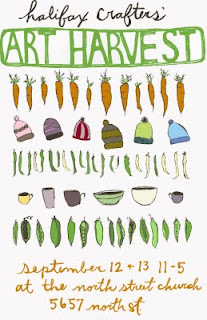 "a 100 mile diet for culture"
this weekend in Halifax, Nova Scotia.
i'll be there!
Posted by Rilla Marshall at 1:35 PM No comments: 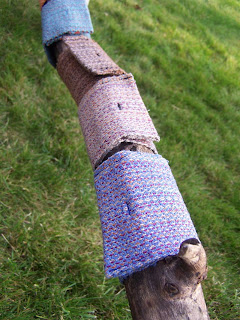 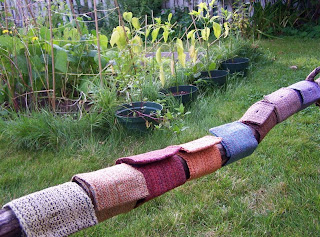 The next few months are going to be very busy. Weaving and preparing for the onslaught of Christmas craft shows, a solo exhibition of my artwork, some hefty wholesale orders, and basically making hay while the sun shines in these autumn months. The crisp fall air makes people want to wrap up with style and coziness. I'm hoping my new cuffs will also do well, mostly for the Halifax Crafters' Art Harvest show this coming weekend. Handwoven with raw silk and cotton and then each hand-dyed, each cuff measures 3.5" wide and 7" long on the inside from velcro to velcro. I'm hoping to have 36 made for the show this weekend - so far I have 24 finished. Next: to find the time to build some nice display branches for them....
Posted by Rilla Marshall at 6:41 PM No comments: I finally got around to taking photos of some more scarves to post to my Etsy shop. I'm really happy with my shots these days - I think a real person modelling the scarves adds a whole lot of life. And I'm the easiest model to book time with.....
Posted by Rilla Marshall at 6:45 PM 1 comment:

Today I stopped into Love, Me Boutique to pick up some scarves I dropped off last week for a customer to peruse. While there, I chatted away with Chara Kingston, the owner/operator/lovely person. She told me about this documentary that is being screened on September 24th as part of the Atlantic Film Festival here in Halifax called "Handmade Nation". The movie is a cross-country (cross US - we need a Canadian version!) exploration of the explosion of craftiness, DIY, art and entrepreneurship that has sparked a new arts and crafts movement in the past few years. I just watched the trailer and am very excited to see some of my world up on the big screen.....
Posted by Rilla Marshall at 1:38 PM No comments: 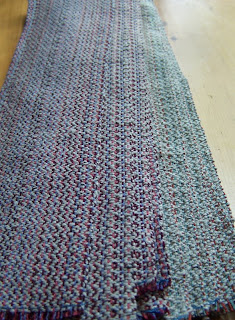 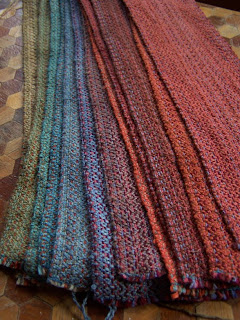 Yesterday I stitched, cut and dyed my first batch of 12 cuffs after finalizing my prototype last week. The pictures above are of the 12 strips of handwoven cloth before dyeing and then after dyeing. It is amazing how colour changes what we see. This afternoon I will set up the sewing machine, hem and sew on velcro closures to the cuffs after a morning of weaving.
Posted by Rilla Marshall at 10:47 AM No comments: